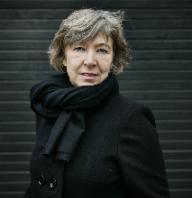 Krestine Kjærholm has designed textile for public and private spaces world wide since 1984. With her modest, and functional design aesthetics she keeps the spirit of classic Danish design alive. Her father, Poul Kjærholm, was one of the most profound Danish furniture designers of the 20th century. Krestine is working as a textile designer and she is chief responsible of Poul Kjærholm Aps.

Work pieces made for: